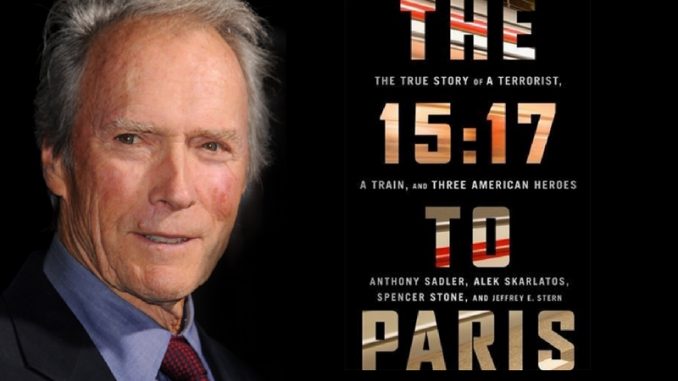 What’s the latest way in which God made known to you His presence, providence and will? For me, it was my drowsy DVR viewing of a TV commercial—an unlikely event around 1:30 am, shocking me with words completely out of context. This experience has led me to re-commit to saying the “Peace Prayer of St. Francis” every day with a new sense of awe and urgency.

A bout of insomnia sent me to the living room early on Feb. 1. I turned on the TV, selected a recording of a program I barely watch anymore, drifted past an interview into the commercials (where I normally would fast-forward), noted an ad for a new movie whose existence I’d dismissed, and then got shocked by a voiceover that seemed completely out of context.

The commercial for Clint Eastwood’s film, “The 15:17 to Paris,” didn’t grab my attention until I heard the voices speaking over the adventure scenes with these words: “Where there is hatred, let me sow love….Where there is doubt, faith….Where there is darkness, light.”

Those are lines from the Peace Prayer attributed to St. Francis, the saint who has inspired me all my life and whom I’ve made a lifetime promise to follow in the Secular Franciscan Order. Hearing those words did indeed shoot some light into the darkness, but I was both cheered and confused as my drowsiness lifted. What was this prayer doing in a Hollywood commercial during the usually profane fare of late-night TV?

I rewound the recording and made sure I wasn’t dreaming. Then, I went to YouTube to watch the movie’s online preview, which did not contain the prayer. Next, I watched a few clips from shows where the movie’s key characters told of the adventure they had in 2015. A recently posted story from The Guardian reminded me of the three heroes—playing themselves in the film—who saved the passengers of a Brussels-to-Paris train by overpowering an AK 47-armed terrorist.

The information renewed the inspiration. The Guardian headline read, “Friends who foiled 15:17 to Paris train attack ‘guided by God.’” Several paragraphs into the story, I read this of the heroes: “All three are practicing Christians. They met in a Christian school in California and grew up attending church and believe that their actions that day were part of God’s plan.”

Anthony Sadler, a pastor’s son and college student who had been accompanying his two friends (both in the U.S. military) on a trip through Europe, said the trio had come away with a lesson. As the newspaper put it, “everyone is capable of the extraordinary, and God has a plan for each of us.”

Sadler continued: “I think it’s our responsibility to take that message and be responsible with it and spread it as much as we can so we don’t waste the opportunity that [God] gave us.”

In their brief, courageous, life-changing encounter with the terrorist, the young Americans had encountered a series of “coincidences,” including the fact that both of the attacker’s guns malfunctioned at crucial moments. When the terrorist aimed a handgun at US Army medic Spencer Stone, who had helped to nullify the AK 47 threat, the handgun failed to fire. “God was definitely with me on that one,” he told Jimmy Kimmel on his program (as clipped on YouTube). Kimmel agreed forcefully, “Yeah, no kidding.”

I emerged from my time of discovery and research with an incomplete explanation for the particular appearance of the Peace Prayer in the commercial. But I was renewed by the ability of three faith-filled heroes to appreciate God’s blessings to them and others; the roles He had arranged for them to play, with providential timing; and the message that must go forth—reflecting their awareness of God’s presence and the heightened sense of responsibility and gratitude among people like me.

My online explorations also turned up news from Jan. 31 that Pope Francis had used his weekly general audience to remind people they should listen carefully when the Word of God is being proclaimed during Mass. We must be attentive at all times when God is speaking to His people, he said.

I learned my lesson of attentiveness in the living room through the unusual timing and circumstances of this broadcast of the Peace Prayer. In a much smaller way than is pictured in the movie, I felt God’s demand for spontaneous responsiveness to His well-orchestrated, eye-opening presence, whenever or wherever we might discover it. None of us can imagine how the Lord might one day summon us to be His instruments in a life-changing way, just as He did with those three people I have adopted as role models.

The practices and prayers of the Secular Franciscan Order help me to see that some repentance—and evangelizing zeal—are in order. One of the world’s most popular prayers, whether or not it originated from St. Francis’s lips, should be on my lips more often. I need to immerse myself in the saint’s readiness to seize all sorts of opportunities for service, his humility to see that all accomplishments are of God’s making, and his motivation of peace–instinctively striving to bring hope amid hatred, doubt and darkness.

None of us knows how we might be called upon as God’s instruments in the future, but role models like St. Francis and those three Hollywood heroes will help us to believe anything is possible. They know the Lord can use factors such as occasional sleepless nights, the world of entertainment and commercials and the gigabytes of memory in DVR machines and YouTube to remind us of the ways his presence can illuminate lives—from there, touching the world.